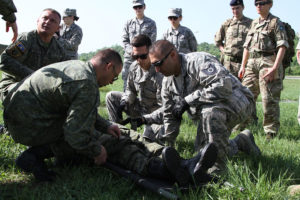 Members of the 185th Air Refueling Wing during training in Kosovo.

Airmen and soldiers from the Iowa National Guard are in the nation of Kosovo this week as part of a two week exercise being conducted with the Kosovo Security Force.

Major Brandon Cochran of the 132nd Wing of the Iowa Air National Guard in Des Moines says around fifty Iowa Guard members are working with their Kosovo counterparts in a variety of areas as part of the U.S. Military, European Command’s State Partner Program. He says there’s the Sister State Initiative, Department of Agriculture, Department of Education, communications, mission support and security police.

“If you have a life experience that you can share with someone else — there’s a nexus point for you within the state partnership program,” Cochran says.

Captain Marty Hogan of Sioux City’s 185th Air Refueling Wing says clinicians are working in the class room and participating in field training with members of the Kosovo Security Force medical clinic. Hogan says they are working with the medical corps to move them toward their NATO certification. Hogan says the annual exercise dubbed “Eagle 6” with the Kosovo Security Force is building continued cooperation and strong relationships.

“This is two-and-a-half years of blood, sweat and tears, lots of phone calls, a lot of extra work, a lot of time after work,” Hogan says. ” But when you come over and you see completion of the exercise, or you see growth in what they accomplished last time, that’s always a huge thing.”

The group also includes members of the Army Guard’s 831st engineering company from Middletown, Iowa who are working with the KSF honing construction skills. The operation is taking place in Kosovo through May 14th. The Iowa National Guard has been working with Kosovo as part of the state partner program since 2011.