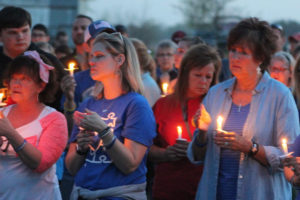 Hundreds of friends and family of Jake Wilson attended a candlelight vigil in La Porte City last night to show their support for the autistic 16-year-old, exactly one month after he disappeared.

Wilson went for a walk April 7th near Wolf Creek and didn’t return home. Thousands of volunteers and law enforcement officials have spent countless hours looking for him and have turned up nothing. La Porte City resident Danielle Gasco helped organize the vigil in a field along Wolf Creek as part of the healing process for the community.

“This was essential,” Gasco says. “To have this gathering for everyone, was part of the process to what has happened, what we’ve come so far with doing, and where we’re still going. This isn’t the end.” Gasco says the vigil was held to show support for Wilson’s family and friends, and to serve as a reminder that the search and investigation into his disappearance is continuing.

“We are going to go until he’s found, standing on that firm foundation that we will be unified until he’s brought home,” Gasco says. “It’s determination and an appreciation for each and every one of us to keep fighting.” Gasco says she was overwhelmed – but not surprised – by the number of people who attended the vigil.

“It’s breath-taking. We’re one,” Gasco says. “The community has come together time and time again, over and over again. They’ve united. When I say that they’re one mind, one accord of La Porte City is just that.” Gasco says its frustrating not knowing what happened to Wilson, despite the efforts of all the volunteers and professionals who have spent time over the past month trying to figure out where he is.

“It’s hard to move on. It’s hard to have every step of your day without thinking about it at some point,” she says. “There’s no closure and it’s hard to process. It takes every ounce of every effort to have that emotional balance subside and live in La Porte (City) without any answers. It’s urgent that we know (what happened to Wilson).”

Investigators continue to do daily searches of Wolf Creek and the nearby Cedar River, but La Porte City Police Chief Chris Brecher (BREK-ur) says the search effort was halted for a couple of days because of flooding. Brecher says when the water recedes, public volunteers may be called out again to recheck some areas after they dry out.