You are here: Home / Health / Medicine / ‘What You Don’t See’ warns parents of unseen signals of teen drug use

The Iowa Narcotics Officers Association has created a traveling trailer to teach parents and other adults how kids may be concealing drug use. It’s called the “What You Don’t See” project.

“The trailer is designed to portray a normal teenager’s bedroom where various forms of signage, clothing, paraphernalia and narcotics will be left in plain sight or in secret,” says association president Doug Hurley, a special agent with the Iowa Division of Narcotics Enforcement.

He says parents will be shown how kids conceal drugs, even in their clothing. Lisa Moore’s son died of a heroin overdose and Moore, who is from Des Moines, is encouraging parents across the state to tour the trailer and get their child in treatment immediately if they discover their kid is using opioids.

“Reach out and get your child some help before it’s too late,” Moore says. “You’re rather they hate you for two years, if they’re made, as opposed to hating yourself when they’re six feet under.” 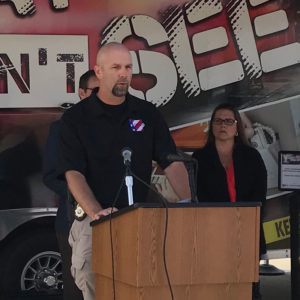 People involved in treatment programs as well as law enforcement officers will be present to answer questions from people who tour the trailer. This weekend, parole officers from central Iowa will be the first group to tour it. Des Moines Police Officer Shawna Isaac says a website’s been created to show where the traveling exhibit will be.

“We are hoping to get this trailer out to as many events as possible, from community gatherings to county fairs to open houses and more,” Isaac says.

The “What You Don’t See” trailer will be parked on the fairgrounds during the Iowa State Fair. It’s for adults only. No one under the age of 18 will be allowed to tour it.

Learn more at the “What You Don’t See” initiative.