You are here: Home / Sports / Cole McDonald expected to return to Iowa rotation 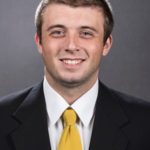 Iowa pitcher Cole McDonald will miss one more start with elbow inflammation. McDonald was lifted from his April 29th start against Michigan and there was concern the junior may have reinjured his elbow that forced him to miss his senior season in high school after undergoing Tommy John surgery. Hawkeye coach Rick Heller says an examination showed no tear in the ulnar nerve.

The Hawkeyes open a three game Big Ten series at Northwestern on Friday.

“He is on some medication that will hopefully get the inflammation out”, said Iowa coach Rick Heller. “I don’t think we will have Cole this weekend but he is back to throwing. It does look somewhat promising for the Penn State series.”

Freshman Jack Dreyer is expected to get the start on Sunday. He pitched five innings in Iowa’s 11-3 win over 17th ranked Oklahoma State.

Iowa is currently six in the Big Ten with a record of 9-7. The top eight teams qualify for the Big Ten Tournament.