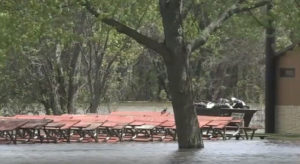 The Mississippi River in Dubuque crested Tuesday at 19.6 feet. It’s reached that height just two times since 2008. The river started dropping today  after steadily rising since the end of April due to heavy snowfalls.

Engineers say it creates significant concern for those on the river. Gary Kilburg, Lockmaster at Lock and Dam 11 in Dubuque, told KCRG-TV that the general public may not realize the dangers the flooding presents. “Debris is a kind word – there (are) trees that are floating out there that, you know you hate to go out there and do damage to your boat, and that would be the best-case scenario – just damage it,” Kilburg said.

The current can make navigating the river difficult. This past weekend, barges broke loose and hit the dam. Some areas along the river are closed due to the spring flooding – including four parks and campgrounds in Dubuque County alone. Brian Preston, Executive Director of the Dubuque County Conservation Board, said the flooding creates maintenance problems and reduces revenue.

“A lot of reservations have already been made for those parks for this time of year,” Preston told KCRG. “So, we’re calling all of those folks up and giving them the bad news that unfortunately, we’re going to be closed. And possibly for an extended period of time depending on how quick the water levels drop.”

Preston said despite how fast they would like to reopen these areas, they have to wait for the water to not only fall but for the ground to dry up. Otherwise, they could do more damage than the flooding is already doing. The Mississippi River, while now falling, is likely to remain above flood stage until early next week.