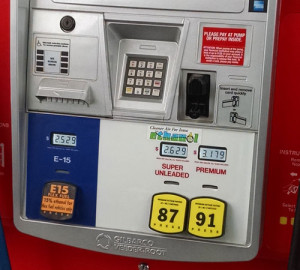 The leader the Iowa Renewable Fuels Association says some good things came out of a White House meeting on ethanol Tuesday,  but says there are still some things that remain unsettled.

IRFA executive director Monte Shaw says the reports he got on the meeting from Iowa’s two U.S. Senators was positive in one area. There was some very good news,” Shaw says, “the president did agree to authorize the sale of E-15 year-round. That was talked about before, that was stated very clearly in the meeting and even (Texas Senator) Ted Cruz tweeted about that part of the meeting accurately. So, that’s something that we can take away from this.” Shaw says there now needs to be action on the E-15 issue.

“We need to see ’em do it, they need to get that process going,” Shaw says. One of the issues that Shaw says was left unresolved is handling the credits given to refineries for blending ethanol with gasoline that are commonly known as RINS (like tins). Shaw says Senator Cruz brought up a plan to let refineries get the credits for ethanol that is exported to count toward the gallons required under the Renewable Fuels Standard.

“It’s awfully hard for me to imagine how a program like that could even function number one — let alone be good for us,” Shaw says. “If you start allowing exported gallons of renewable fuels to count toward the RFS, it’s just gallon-for-gallon demand destruction. Every gallon we export is a gallon they don’t have to blend here in the United States.”

Shaw says the reports he’s gotten indicate things should be moving the right way for ethanol. “From what we’ve been told, everybody in that room from the president all the way down to Ted Cruz was on the same page that the president was going to move forward on E-15 year round sales. That is excellent news,” according to Shaw. “They all agreed — despite Cruz promoting this — that there was not going to be any type of RIN cap or RFS waiver scheme of the type that he was promoting. That is good news,” Shaw says.

He says another issue is the ethanol exemptions that were intended to help small refineries deal with the ethanol blend mandate that were given to large refineries. Shaw says Ag Secretary Sonny Perdue and EPA Administrator Scott Pruit are exploring that situation and will report back.

“That was I would say an outstanding discussion that was not finalized and we have to now see what EPA Administrator Pruit and U.S.D.A. Secretary Perdue come back with . They were charged with coming up with a plan that would deal with small refinery exemptions,” Shaw says. He says the outcome could go either way.

Senator Joni Ernst released this statement on the meeting:

“Today, the President outlined his intention to direct the sale of E15 year-round, a move that will help put Iowa’s corn farmers, ethanol producers, and our rural communities on a promising path forward.

“While I am still assessing the full implications of the President’s notion to attach Renewable Identification Numbers (RINs) to exported ethanol, an idea Administrator Pruitt committed to not pursue in a letter last October, I am pleased that the President did not move forward with a RIN cap that would have destroyed demand, hurting both farmers and biofuel producers. Allowing E15 year-round will drive up domestic ethanol production and consumption to help maintain already low RIN prices. Additionally, I am encouraged the administration will be taking a closer look at the “hardship” waivers that have been abused by EPA to undermine the RFS.

“I will continue working with this administration to ensure the commitments made today protect Iowa’s 88,000 farms and the 50,000 jobs tied to the renewable fuels industry.”

Senator Chuck Grassley released this statement on the meeting:

“President Trump agreed to allow for the sale E15 year-round. That’s good news for farmers and consumer choice at the pump. Allowing higher blends of ethanol to be sold in the summer months fits in well with EPA’s deregulatory agenda. There was also an agreement to not pursue an artificial cap on RIN prices, which would have destroyed demand for biofuels and hurt biofuels workers.

“I told the President and Administrator Pruitt that EPA’s ‘hardship’ waivers for billionaires are hurting biofuels and undermining the RFS. They also undercut the President’s commitment to meet the annual 15 billion gallon volume obligation set by Congress under the RFS. There was discussion about how to reallocate the waived obligations so that demand for biofuels wouldn’t be hurt. While details weren’t decided, I look forward to reviewing a plan being developed by Secretary Perdue and Administrator Pruitt. Any fix can’t hurt domestic biofuels production.”