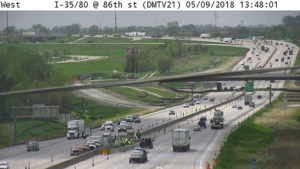 Three-point-four billion dollars of the program goes for the state roadways and DOT spokesman Stuart Anderson says that includes a lot of ongoing work on the interstates. “Probably the most significant projects on the interstates right now are what we would call modernization projects — so its totally reconstructing the interstate systems in Council Bluffs and Sioux City to meet modern design standards and to address increased traffic,” Anderson says.

Another interstate project adds a segment to the work on the highway between Ankeny and Ames. “This draft program does include the addition of reconstruction and improving I-35 from the north end of Ankeny up to Iowa 210 as you head towards Ames,” Anderson says.

There are also several projects on non-interstate highway. “We expect to complete the 4 lanes of U.S. 20 in western Iowa by this fall,” according to Anderson. “So that’ll complete the four-lane construction of U.S. 20 across the entire state. That’s been a project that’s been underway for many years.” Other state highway corridors are also in the plan.

“This five-year program continues work on four-lane improvements on U.S. 30 in Tama and Benton County. And also U.S. 61 down in southeast Iowa. So, significant corridor work will be continuing,” Anderson explains. Anderson says part of the funding comes form the gas tax increase.

He says this program includes a little more than $500 million of the fuel tax increase implemented in March of 2015. The Transportation Commission will take a vote on the program next month. He says the plan is available on the DOT website for any comment and the commission will act on final approval during their business meeting on June 12th.