You are here: Home / Agriculture / Grassley ‘going to reserve judgment’ on EPA Administrator 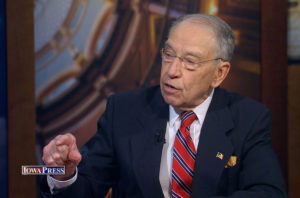 Senator Chuck Grassley today said he trusts EPA Administrator Scott Pruitt to follow through on the president’s promise that a higher blend of ethanol may be sold year round, but Grassley said he’s worried Pruitt may take other actions to undermine what was discussed earlier this week during a White House meeting about ethanol.

“In other words, I’m going to reserve judgment,” Grassley said. “…Other things we talked about that they might be doing that will detract from E15 12 months out of the year.”

Grassley has been critical of the EPA’s decision to grant some oil refineries exemptions to federal ethanol mandates. During an early morning taping at Iowa Public Television of tonight’s “Iowa Press” program, Grassley was asked about Pruitt’s future.

“Have you about had it with Scott Pruitt?” a reporter asked.

Grassley paused for a deep breath before replying.

Grassley is pleased with Pruitt decisions which have rolled-back Obama-era regulations, including the Waters of the U.S. rule that groups like the Farm Bureau opposed. Pruitt was serving as Oklahoma’s attorney general when President Trump nominated him to serve as EPA administrator. Grassley said he’s been surprised by reports of Pruitt’s spending habits in the agency.

“I would think that a person who came from state government where you don’t have all the atributes of playing with the people’s money like you do in Washington, D.C., I would think he would come in there with a very conservative approach,” Grassley said. “I don’t see it with some of the things he’s done.”

A former EPA aide told congress in April that Pruitt spent $43,000 to turn a closet into a soundproof phone booth in his office. Pruitt also spent $9000 installing office locks that are opened by fingerprints. Pruitt’s accused of pursuing a lavish lifestyle on the taxpayers’ dime, including first class air travel and five-star hotels. President Trump took to Twitter last month to defend Pruitt, saying Pruitt was doing a “fantastic job” as head of the EPA.