You are here: Home / Fires/Accidents/Disasters / Lightning damages monument to children in Evansdale 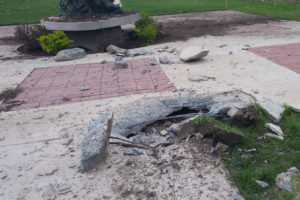 Officials in Evansdale believe a lightning strike early Wednesday morning damaged a monument dedicated to children who died too young, including two cousins who were kidnapped from the community and murdered six years ago.

Evansdale Park Board Chairman Tom Nichols says it appears a bolt of lightning hit the ground next to a bronze sculpture of kids climbing on a mountain at Angel’s Park. Nichols was there surveying the damage late Thursday afternoon.

“The lightning, once it struck, possibly picked-up some of the re-bar that’s in the concrete, traveled through that, and blew it up in four different spots (around the monument),” Nichols says. Scattered thunderstorms were moving across the area around 1:20 a.m. Wednesday when an extremely loud “boom” was heard by several Evansdale residents, many of whom were jolted from their beds while sleeping. Nichols says city officials are confident that lightning — not vandals — caused the damage at Angels Park, although they aren’t 100-percent certain. 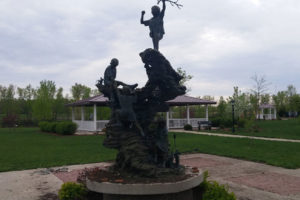 “We had somebody who was down here the night before and said the damage wasn’t here,” Nichols says. “He came back the next day and reported it to us. So, we’re pretty sure it happened during the storm.” Several large chunks of concrete were found around the monument and dirt, thrown in a northwest direction away from the sculpture, extended for several feet on the adjacent sidewalk. Nichols doesn’t know yet what it will cost to fix the damage.

“We found out that insurance doesn’t cover (damaged) concrete,” Nichols says. “We’re going to have to get a hold of some concrete contractors, have them come over and get some estimates.” Angels Park is located on an island in Meyer’s Lake and was initially built to memorialize 8-year-old Elizabeth Collins and 10-year-old Lyric Cook-Morrissey, the two Evansdale cousins who were kidnapped and killed in 2012. In addition to the sculpture, the park also features benches and four gazebos – each of which is dedicated to a murdered child with ties to Black Hawk County.