You are here: Home / Crime / Courts / Postville religious community to mark the 10th anniversary of the Agriprocessors immigration raid 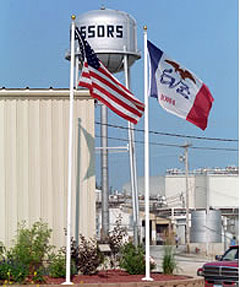 A photo of the then Agriprocessors Plant.

Saturday marks the 10th anniversary of the federal immigration raid on the then Agriprocessors kosher meat processing plant in Postville.

Some of the people who were in the northeast Iowa town talked with reporters about their view of the raid that day. It still holds strong feelings for Sister Mary McCauley, who was the Pastoral Administrator at St. Bridget’s Catholic Church in Postville. “I describe that experience as one of definitely being overwhelmed, I was in shock and I was in anger,” McCauley says.

McCauley is now retired and says that day set her ministry on a different course. “I personally describe May 12th as the most exhausting, challenging, frightening — and yet I have to say the most transformative day of my life — because it was a day that I was really summoned to educate and advocate more directly for immigrants and refugees,” according the McCauley. there were some 389 people arrested in the Postville raid.

Reverend David Vásquez-Levy was with Luther College in Decorah when the raid took place. His message now to elected officials is “we can do better.” Vasquez-Levy says Postville was a microcosm of what can happen when the wrong approach is taken. “It’s a small community where a large raid was affected,” Vasquez-Levy says, “which allows us to see evidence of the reality of enforcement without any other enforcement that have a path towards the future.” He says the raid showed the ripple effect such actions have on an entire town.

“The ripples that came were not only affecting the immigrant community — those most directly affected — but the ripples spread from there out,” according to Vasquez-Levy. “Within six months, the city had gone into bankruptcy, 90 percent of the rental properties in the town of Postville 10 years ago were in bankruptcy. Areas farmers began to file for bankruptcy because they no longer had a market for their animals that they were bringing to the factory. The factory itself went into bankruptcy.”

Vasquez-Levy says the Postville raid showed how selective the country is in the enforcement of immigration law as the chief executive of Agi-Processors, Shalom Rubaskin convicted of defrauding banks of millions of dollars. He was sentenced to 27 years in prison and then President Donald Trump, at the urging members of Congress of both parties, commuted Rubashkin’s sentence and he was released after serving eight years in prison.

Vasquez-Levy says the Postville raid did have a positive side in showing the importance the religious community.”Because following the raid Postville became an example of how congregations across religious traditions can come together to make a difference. Because in rural communities — when businesses are closing down, when schools are getting consolidated — it is churches and faith communities that remain the anchors of these communities.”

The Trinity Cluster Catholic community that has parishes in Postville, Monona and McGregor plans to commemorate the 10th Anniversary of the Postville Raid today beginning with an interfaith prayer service at 10:00 A.M. at St. Bridget Catholic Church in Postville, followed by a walk to Meyer Park and a noon rally.