You are here: Home / Military / Senator Ernst, in tweet, says McCain and his family due ‘respect’ 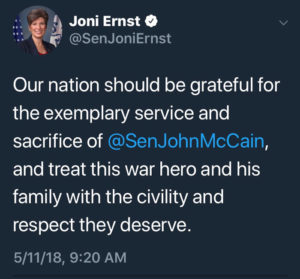 In a tweet sent this morning, Senator Joni Ernst said the “nation should be grateful” for McCain’s “exemplary service and sacrifice.” Ernst said McCain, who was a prisoner of war in Vietnam for five and a half years, is a war hero. Ernst, in her tweet, said McCain and his family should be treated “with the civility and respect they deserve.”