You are here: Home / Education / Students at U-I urged to donate items as they exit the dorms for the summer 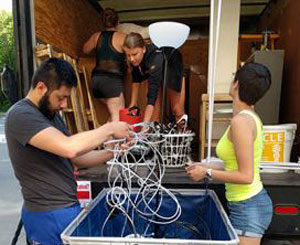 U-I students are urged to donate instead of dumping unused items.

About 6,000 students who’ve been living in University of Iowa dorms are moving out this week and an effort is underway to keep them from filling the dumpsters with perfectly good stuff.

Beth MacKenzie, the U-I’s recycling coordinator, says she’s urging students to think of the environment and the less fortunate before they start tossing everything out, from clothes to furniture to food.

MacKenzie says, “I’ve been talking to students and there’s some who just don’t want it anymore, some want to take it with them but just don’t have the room, and some are traveling for the summer or they’re moving into a small apartment and they’re having to downsize.” The 9th annual effort is called “Don’t Dump, Donate,” and last year collected 25-thousand pounds of items from students as they departed the Iowa City campus.

“Students this year started up a program called the Clothing Closet where they collect business clothing for students in need of clothing for interviews, so we’ll be collecting donations for that,” MacKenzie says, “as well as textbooks and a little bit of food for our student food pantry.”

Donation trucks from the various agencies will be staged through Saturday at four dorms: Burge, Catlett, Hillcrest and Mayflower. A similar effort is underway at Iowa State University, partnering with Goodwill Industries of Central Iowa, the United Way of Story County and Student Wellness. Also, UNI’s Panther Pickup is working with the Society of St. Vincent de Paul, the Salvation Army and Habitat for Humanity to recycle and reuse.