You are here: Home / Agriculture / Activists press for national ban on ‘factory farms’ 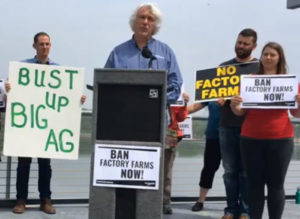 A coalition of state and national groups are calling for a ban on so-called “factory farming” in the United States. Adam Mason of Iowa Citizens for Community Improvement said large-scale livestock confinements have “decimated” family farms.

“Thinking back to the late ’70s, there were over 80,000 family farm operations raising livestock across this state. Today, we have 10,000 factory farms,” Mason said. “That ain’t right.”

Mason spoke at a midday news conference in Des Moines, as did Bill Stowe, CEO and general manager of the Des Moines Water Works, which is among the 100 largest water utilities in the country.

“At Des Moines Water Works, our mission is to provide safe, affordable, abundant drinking water for half a million Iowans,” Stowe said. “It’s a job that becomes increasingly difficult, unfortunately, because Iowa’s surface waters are filthy.”

The Raccoon River has pollution levels today that exceed federal standards, requiring additional and expensive treatment before it can be used as drinking water. Stowe said there’s “no question” what he calls “industrial farming” upstream is contributing to the pollution.

“With bacteria, with soils, with chemicals and a growing concern for us is blue green algae and cyanotoxins,” Stowe said.

Stowe and the others who spoke at the news conference would like city and county officials to have the authority to regulate farming operations. Stowe said corporate interests have ruined states like West Virginia and Iowa should take a different path.

“We are not going to find ourselves left in a bone pile, a remanent of a failed industrial system like coal mining, because industrial farming and dirty agriculture is heading us on that same path,” Stowe said.

A national group called “Food and Water Watch” has released a report critical of the impact “massive amounts of manure” from livestock operations are having on the environment.

A spokesman for the Iowa Pork Producers Association said any moratorium on the pork industry “would greatly stifle rural Iowa economic activity” and limit entry into farming for the next generation. The association’s spokesman says modern Iowa pig barns “are designed to contain all manure” and “protect water quality.” He also noted there already are more than 200 pages of state regulations for the pork industry.