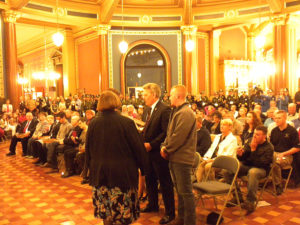 It was an emotional weekend for the members of the Pottawattamie County Sheriff’s Department.

Sheriff Jeff Danker, some of the deputies, and the family of slain deputy Mark Burbridge attended the National Peace Officer Memorial Ceremony in Washington, D.C. Danker attended the state ceremony prior to heading to the nation’s capitol.

“It’s tough,…you know you’ve got to continue with life, but it’s tough to have all the feelings and all the emotions coming back again, “Danker says. “It’s really great that the state recognizes our fallen law enforcement officers.” Another Pottawattamie County Deputy who was killed in the line of duty in 1947 was also honored at the state ceremony. Robert McKinley’s name will be on the state memorial along with Burbridge.

“There’s times when you seem like you are doing pretty good and certain things will trigger different memories of Mark and different things like that,'”Danker says. The man who killed Burbridge was able to use a handcuff key he got from another inmate to free himself. The Pottawattamie County Jail now has a new system designed to find contraband. 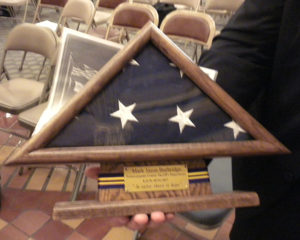 “It should be able to scan the prisoner coming and hopefully we’ll be able to tell if there is anything hidden on the body that the officers weren’t able to find when they brought them into the facility,” Danker explains. He says they are pioneers among the counties in using the system.

“We’re the first sheriff’s office to get that. And we are very pleased that the board of supervisors was able to provide the funding for this to be able to do that. Because it really gives us another tool to fight this contraband being brought into our facility,” Danker says. Danker was presented a flag at the state ceremony in honor of Burbridge.