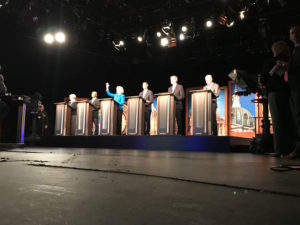 The six Democrats running for governor engaged in a sometimes feisty debate during a statewide broadcast tonight.

The candidates met in Iowa Public Television studios for 90-minutes of live conversation. With little public pollling on the race, Des Moines businessman Fred Hubbell — the only candidate running advertisements statewide — was targeted by three of his rivals.

“We need a nominee that hasn’t had a hand in the cookie jar on all this…I think we have to have somebody that has not shown that they’re willing to engage in this coupon economic system that is failing our state right now,” Boulton said.

Hubbell responded: “I don’t know what he’s talking about. I mean, he didn’t name any particular project or location, but when I went into economic development, we had a film tax credit scandal that was costing Iowans tens of millions of dollars. We fixed that. We saved our state millions of dollars and we stopped giving away any state money to any project that did not have a prevailing wage requirement.”

Early in the debate, Hubbell listed ideas for setting new limits on hundreds of millions of dollars worth of state tax credits to businesses, but Hubbell did not join his competitors in calling for immediate repeal of the GOP tax cut bill that passed the legislature in April. Later in the debate, Hubbell returned to the subject.

“We can all talk about reversing this tax cut that they came up, but there are some good things in there and we should address the existing problems before we take a look at dealing with that tax cut,” Hubbell said.

John Norris, the chief of staff to former Iowa Governor Tom Vilsack,  replied: “I disagree with Fred. We’ve got to throw that tax cut away and start over.”

Norris said there’s no way to sustain a $2 billion tax cut and it’s time to “help poor families in Iowa get ahead” rather than keep a GOP tax plan geared “to help millionaires.”

All the Democratic gubernatorial candidates oppose Iowa’s new law which bans virtually all abortions in the state, but Cathy Glasson, a nurse and union organizer from Coralville, challenged Hubbell’s commitment to the issue.

“If you’re up here talking about women’s reproductive health and safe, legal abortions, you’d better be walking the walk and not talking the talk,” Glasson said.

Moderator David Yepsen interjected: “Who are you talking about?”

Glasson replied: “I’m challenging Mr. Hubbell who has contributed to campaigns at the state legislature that actually voted for the fetal heartbeat bill.”

Hubbell responded. “She’s talking about Peter Cownie, who’s a state legislator. Charlotte and I have known the Cownies for over 30 years, ever since Peter Cownie was a young boy, so when we had an opportunity to support Peter, of course we did. Did I like his vote? No. Did I like the vote of anybody else who voted for it? No. If I had been governor, would I have vetoed it? Yes.

The June 5 Democratic Primary is just 20 days away, to be conducted with a new voter verification law approved by Republicans. All the Democratic candidates held up their hands at the end of the debate to indicate they’d repeal the law.

“It’s addressing a problem that doesn’t exist,” said Andy McGuire, a medical doctor who has served a chairwoman of the Iowa Democratic Party. “There wasn’t fraud to begin with. This was just to limit voting and we should make voting for everyone possible.”

Ross Wilburn of Ames, an African American who served three terms as mayor in Iowa City, likened the new requirements to racial segregation efforts in the south.

The six Democratic gubernatorial candidates will appear together at one more debate on May 30 that’s sponsored by The Des Moines Register and will be broadcast by KCCI television in Des Moines.