You are here: Home / News / In midst of ’81 hostage crisis, Hubbell says he resolved to ‘do more’ 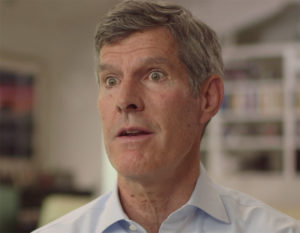 Hours before Fred Hubbell joins the other five Democrats running for governor tonight in a televised debate, Hubbell’s campaign has released a short video that reviews a traumatic event from Hubbell’s past.

In 1981, Hubbell and his wife, Charlotte, were taken hostage in an airplane that was diverted to Afghanistan, then Syria by three armed hijackers. Another passenger just a few feet from Hubbell was shot and tossed from the plane.

Hubbell talked about the experience with Radio Iowa. “My kids call me steady,” Hubbell said. “I’ve just learned that good things never last forever and bad things, if you’re thoughtful about it and think about it properly, you can get through it.”

Charlotte Hubbell was released after six days. Fred Hubbell, who was 30 years old at the time, spent a total of 13 days as a hostage before he and the remaining passengers were released.

“You inevitably spend time thinking about what you have been doing and what you could have done and what you’d do if you get off the plane, because you don’t know if you’re going to get off. You’re assuming you probably won’t,” Hubbell said. “…I kind of made the decision: ‘Look, if I get a second chance, I need to do more. I need to use it — more than I used the first chance.'”

The Hubbell campaign video includes news clips about the hostage crisis and features Hubbell himself speaking about those events in 1981. Hubbell told Radio Iowa his campaign produced the 94-second video because he’s been asked about the experience as he’s campaigned around the state.

“Charlotte and I have, from the very day it happened, not wanted to make a big deal out it and not wanted to seek publicity about it. People wanted us to write a book about it many different times and we chose not to do that. I mean, that’s not kind of how we run our lives,” Hubbell said. “But, you know, I’m in a different situation now. I have to talk about my experience and my background and people want to know.”

Sitting for days on that plane helped Hubbell come to this conclusion: “If I can survive something like this, I can survive a lot of things.”

Pakistan agreed to free 55 political prisoners after the hijackers threatened to execute Fred Hubbell and two other Americans on board, bringing the 13-day hostage situation to a peaceful end.

Once Hubbell and his wife returned to the United States, friends and relatives gave the couple stacks of newspaper clippings about the hostage crisis. The Hubbells stuffed the articles in paper grocery bags. Today, those bags sit in the basement of the Hubbell’s Des Moines home. Hubbell said he’s never read any of it and doesn’t intend to.