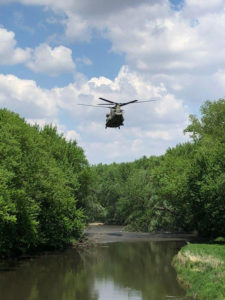 An Iowa National Guard Chinook helicopter helps in the search for Jake Wilson.

The Iowa National Guard helped Wednesday in the search for Jake Wilson, the autistic 16-year-old from La Porte City who’s been missing now since April 7th.

La Porte City Police Chief Chris Brecher says the guard provided the services of a military helicopter during a training mission. According to Brecher, the Chinook hovered over Wolf Creek to create down pressure in hopes the disturbance would free up an object trapped under the water. During the operation, two teams in kayaks made their way down the creek to check on any immediate results.

Authorities didn’t give any advance notice of the Iowa National Guard exercise, due to safety concerns. Details of the operation were made public in a press release Wednesday evening. Officials also had a large excavator in the water Wednesday, removing large debris from Wolf Creek as part of the search.