You are here: Home / News / Water levels good in most of Iowa 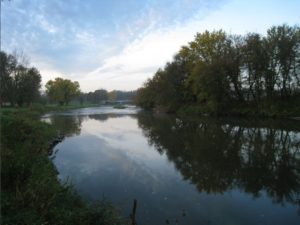 While the May rains have caused problems with farmers getting into the fields, they have help make up for a lack of moisture in April.

The DNR’s Tim Hall keeps an eye on water levels across the state and says parts of the state can use all the rain they can get. “We had a really, really dry April and now things have picked up here in May and there are some parts of the state that are doing really well and some could still use some moisture. On average it is okay — but there are some places that still need to be carefully watched,” Hall says.

The southeast portion of the state is one that has been drier, and Hall says that extends into other states.. “There is some significant major draught going on if you go south and west into Oklahoma, parts of Texas, New Mexico and Arizona,” Hall says. “If when look at the drought map for the nation, we are sort of at the very end of this area of dryness that comes through those states and then up through Kansas and part of Nebraska and into Iowa.” He says southeast Iowa has had dry conditions for two years and the recovery is slow.

“It takes awhile to get out of a drought that takes awhile to get into,” according to Hall. “So hopefully we’ll see some consistent normal rainfall over a couple of months to pull that part of the state out of drought. It doesn’t happen in one storm.” Hall says the positive news is we are in the wet cycle of the calendar.

“May, June and July are the three wettest consecutive months. I think about 40 percent of our annual rainfall comes during these three months,” Hall says, “so they’re pretty important in terms of the water balance for the state.” Hall says most Iowa waterways are at their banks or higher right now.

“On a statewide average the stream flow is a little bit above normal right now. It’s been trending around normal line for much of the spring,” Hall says. He says things have been above normal in eastern Iowa, where there has been some flooding on the Mississippi.

This week’s crop report reflected the dry conditions Hall talks about as corn planting in the southeast part of the state was at 91 percent complete and the beans were at 65 percent. That compares to the statewide average of 65 percent of the corn planted and 33 percent of the beans.