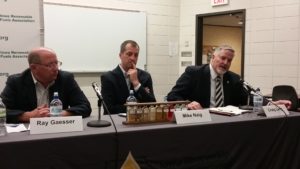 A water quality bill was the first piece of legislation Governor Kim Reynolds signed into law this year, but all six of the candidates running for Iowa Secretary of Agriculture say that bill’s just the first step in addressing the issue.

The Democrat and all five Republicans running to be state ag secretary appeared at a forum in Mason City last night. Republican Craig Lang of Brooklyn, former president of the Iowa Farm Bureau, said farmers need to prove to consumers that progress is being made.

“You have to realize that we’re only one administration away or one federal judge away from being regulated and forced to do something that doesn’t work for us as farmers,” Lang said. “So we need to get together as farmers, prove to the public that we are making meaningful improvements in the water.”

Republican Dan Zumbach of Ryan is a state senator and chairman of the Senate Ag Committee. He voted for the water quality bill, which maintains the state’s voluntary approach to improving water quality and provides new funding for farmers’ soil and water conservation efforts. 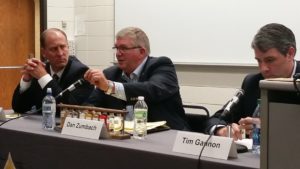 “If there’s anything I’ve learned as a farmer myself and watching my neighbors and growing up and learning from my parents, if you give someone the opportunity to do something and do it right, they will,” Zumbach said. “And so if we continue the educational process, we continue to offer incentives to do what’s right, people in agriculture will do it.”

Republican Mike Naig is Iowa’s current secretary of agriculture, appointed by the governor to the position after Bill Northey resigned for a job in the U.S. Department of Agriculture. Naig said there’s been significant progress in the five years since the state’s voluntary “nutrient management strategy” was established and the new state funds will advance the process.

“We need to continue to develop demonstration projects that help us prove practices and prove the economics around practices,” Naig said, “and now with the new dollars…we need to target our efforts into some larger-scale implementation projects in specific watersheds and build water quality infrastructures.”

Republican Chad Ingels of Randalia is a former chair of the Iowa Environmental Protection Commission. He favors farmer-led efforts that focus on an entire watershed.

“Enabling them to have flexible incentives, and that may vary across the state, set their own priorities on which practices should be emphasized in those particular watersheds, because they know better what management works in their areas,” Ingels said.

Republican Ray Gaesser of Corning, former chairman and president of the American Soybean Association, said the state needs to help ensure farmers and landowners get technical assistance and data about which practices work best to reduce run-off.

“We need to continue to work with cities like Cedar Rapids and Dubuque and others to work upstream and help farmers install those practices that really don’t benefit them on the farm, but it does benefit the city,” Gaesser said, “like bioreactors and those kind of things.”

Tim Gannon, the only Democrat running for state ag secretary, lives in Des Moines and is part of a family farming operation near Mingo. Gannon worked in the U.S. Department of Agriculture when former Iowa Governor Tom Vilsack led the agency and Gannon said other states are finding ways to get private sector investment in conservation projects.

“I think there are ways that we can measure what we’re doing both in terms of practices and in terms of proving those practices,” Gannon said, “so that we can then incentivize private investment. Then we’re not talking $4-to-5 billion that would have to all come from the state. We’re talking a much smaller amount of money.”

The candidates made their comments at a forum sponsored by the Iowa Renewable Fuels Association.