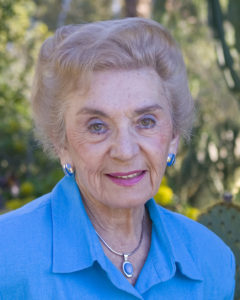 An 86-year-old Holocaust survivor who graduated from Grinnell College in 1952 will be back in Iowa Monday to deliver the commencement address to this year’s Grinnell College graduates. Celina Karp Biniaz has a few life lessons to share.

“Accept people. Do not judge,” she said in previewing her remarks. “Work towards lessening bigotry and hatred because that is extremely corrosive, not to the people who you hate, but to yourself.”

Biniaz had planned to be a “pre-med” major when she enrolled at Grinnell, but wound up studying philosophy instead.

“Trying to find an answer to the Holocaust, really,” Biniaz said during a telephone interview with Radio Iowa from her home in California. “So I ended up being a philosophy major, which I have never regretted.”

Biniaz was 13 years old when she entered the Auschwitz concentration camp. Three years ago, she was one of 100 surviving prisoners who gathered there to mark the 70th anniversary of the camp’s liberation.

“When I got there, I had a most interesting out-of-body experience,” Biniaz said. “There I was, the 83-year-old woman, looking down onto the 13-year-old girl and her experiences in Auschwitz. Somehow the memories just flooded in and I wrote some poetry from that 13-year-old girl’s point of view.”

She’s now written half a dozen poems, inspired by her memories from 1944 until 1947, when she and her parents moved to Des Moines.

Before entering the concentration camp, Biniaz met Oskar Schindler — the factory owner credited with paying bribes to the Nazis to save hundreds of Jews.

“I was on the Schindler’s List to go to his munitions factory in Czechoslovakia,” said Biniaz, who was the youngest person on The List. “He picked me because I had small hands and was able, then, to clear the machinery, inside.”

Biniaz is among the Holocaust survivors who’ve recorded their first-hand experiences for the visual history project filmmaker Steven Spielberg launched after “Schindler’s List” was released. Biniaz did not speak about the horrors of her teenage years until 1993 — after she saw the movie and was inspired by Spielberg’s artistry and Schindler’s legacy.

“Two people who single-handedly changed people’s lives,” Biniaz said. “One of my messages is that everybody can change somebody’s life.”

And Biniaz said millennials give her “incredible faith” they will do the same.

“I see their total acceptance of diversity, which makes me feel so good,” Biniaz said, “their willingness to confront things.”

On Monday, Biniaz will be awarded an honorary Doctor of Humane Letters during the commencement exercises on the Grinnell College campus. Biniaz retired in 1992 after a career as a teacher.