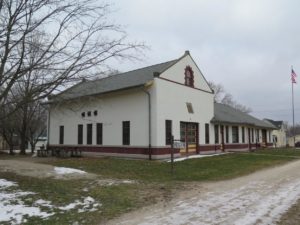 The Center Point Depot Museum. Photo thanks to Iowa Department of Cultural Affairs

One of the latest Iowa listings on the National Register of Historic Places is the building that now houses the Center Point Depot Museum. It was once a main stop on the train line that ran between Cedar Rapids and Waterloo.

Sharron Hannen, secretary of the Center Point Historical Society, says the so-called interurban rail line was a mainstay of travel in eastern Iowa prior to World War Two.

“It was cheap, like a quarter for kids, I think, to go to Cedar Rapids,” Hannen says, “and they would put their kids on the interurban to see their grandparents in Cedar Rapids.”

The depot was built in 1914. The last interurban passenger run was made through Center Point in 1956. The rail line was abandoned in the 1970s and developed into what’s now a popular bike and hike trail.

“The depot is on what is now the Cedar Valley Nature Trail,” she says, “but it used to be the WCF&N, the Waterloo, Cedar Falls and Northern electric railroad.”

While passenger service through Center Point ended in ’56, freight trains continued operating until 1973. The depot was renovated into the museum in the late 1990s.

The Midland Building in downtown Des Moines has also been added to the national list of historic places.