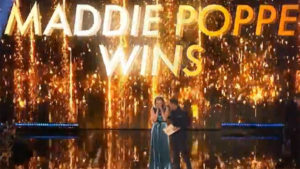 Clarksville’s own Maddie Poppe sang her way into history Monday on the finale of ABC’s “American Idol.”

Host Ryan Seacrest read the results of the nationwide voting. “The winner of American Idol is: Maddie Poppe. Congratulations Maddie,” Seacrest said. Poppe was one of three finalists and that was cut to two before the big annoncement. Poppe advanced with Caleb Lee Hutchinson, who told the audience in a surprise that the two are dating.

Poppe was given a guitar shortly after being named the winner. She struggled to overcome the emotion as she sang one of her original songs, “Going Going Gone.”

Poppe became the first Iowan to win the “American Idol” contest and in the process captured the attention of the country with her range and ability to perform on the show under pressure. Some 10,000 people turned out to see her at the Butler County Fairgrounds last week as she returned home after being named a finalist

Poppe wins $250,000, a performance at the Hollywood Bowl and a recording contract with Hollywood Records.