You are here: Home / Crime / Courts / Campaign underway to increase seatbelt use 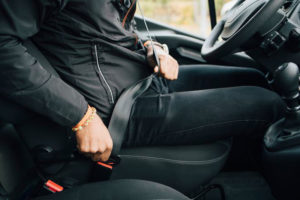 Governor’s Traffic Safety Bureau Chief Patrick Hoye says Iowa’s seat belt compliance rate is still one of the best in the country, but it’s trending in the wrong direction.

“Last year, we dropped to 91%. We had been at 93% the year before and other states are actually catching us,” Hoye says. The seat belt survey is conducted every year, but survey teams moved to a new location in the state last year. Hoye says that could explain why the compliance rate dropped.

“We believe that might have had an impact,” Hoye said. “Seat belt compliance rates are lower in rural Iowa and more of the survey sites were in rural Iowa. So, I think that has a little to do with it.” Iowans ticketed for failing to wear a seat belt can face a fine and court costs totaling $127. While failing to buckle up can prove costly in financial terms, Hoye says it could also cost a person their life.

“In the state of Iowa, we see about 43% of our fatalities are unbuckled. For a state that has over a 90% seat belt compliance rate, yet 43% (of those killed) are unbuckled – that tells you the importance of buckling up,” Hoye said.

A ‘Click It of Ticket’ campaign began Monday and runs through June 3rd.