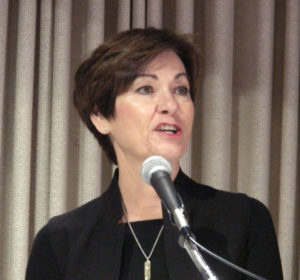 Iowa Governor Kim Reynolds was questioned today about the amount of money the state is saving by having private firms run the Medicaid program.

The questions come after Democrat State Senator Pam Jochum of Dubuque asked the state auditor to review the Medicaid program after Jochum says got an answer on cost savings From DHS that wasn’t fully explained.

The Republican Reynolds says Medicaid Director Michael Randle would provide any information needed. “I think it’s political. I would hope that she would sit down with Director Randle and walk through the process and give him an opportunity to explain,” Reynolds says. She says the state has taken the right steps with Medicaid.

“The bottom line is we’re focused Iowans and making sure that vulnerable Iowans have access to the services that they deserve,” Reynolds says. “This is proactive, it’s patient-centered, and we’re going to continue working on it every single day. And we welcome them to be a part of it. But let’s sit down and see how we can work together the really put Iowans first and keep the program moving forward.

Reynolds defended the Medicaid Director’s handling of information on the program. “He has made it public and he’s willing to sit down with anybody — it’s a complicated matter,” according to Reynolds. “And so we need to make sure that we are getting the standards in place and that we’re consistent in moving forward. I know director Randle would be happy to sit down with the media and walk through that process.”

Reynolds made her comments at her weekly news conference.