You are here: Home / News / Tornado activity has been low so far this year 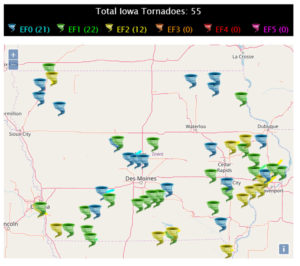 Tornadoes can strike during any month of the year, but we’re approaching June and there’s been very little twister activity across Iowa thus far in 2018.

Meteorologist Allan Curtis, at the National Weather Service in Johnston, says to enjoy the calm as there will be more storms.

“Some years, it’s very quiet and cool but we have seen in the past that it can change very quickly and we’re about half-way through our normal severe weather season,” Curtis says. “While it’s been quiet so far, we certainly could see that switch flip and we could have an active end to it.”

Warmer weather, with highs in the 80s and possibly 90s, is expected later this week, but overall, temperatures this spring have been on the low side.

“We’ve been stuck primarily in a quiet, cool pattern and as most of us in Iowa know, when we’re talking about cool weather, it’s really tough to get those strong-to-severe storms going,” Curtis says. “We’ve really only had one day with any tornadoes at all and even then, they were very short, very weak.” That one day was Thursday, May 3rd, and as many as five tornadoes were spotted across the state, though the exact count remains in question.

“We still don’t have an official number,” Curtis says. “We’re going back through and confirming some of them. At this point, you can certainly count them on one hand. All of those are almost certainly E-F zeros.” That’s the weakest of all tornadoes, with the strongest being E-F fives.

The main severe weather months in Iowa are April, May and June.