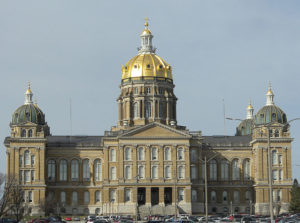 The Democratic Leader in the State Senate says Nate Boulton should resign from the legislature.

Boulton ended his campaign for governor this morning, less than 24 hours after The Des Moines Register published accusations from three women who say Boulton touched them inappropriately. Boulton has apologized for the actions described in the newspaper, emphasizing they took place “in social settings.”

“Sexual harassment is unacceptable whether it occurs in a social or professional setting,” Senate Democratic Leader Janet Petersen said this morning in a written statement.

Petersen, who had endorsed Boulton’s bid for governor, said if Boulton fails to resign from the senate, she will support “a full, independent investigation into allegations against him.”

Boulton was first elected to the state senate in 2016 for a term that will expire in January, 2021.

Senator Liz Mathis, a Democrat from Cedar Rapids who had endorsed Boulton, issued a statement on Twitter this morning. “I stand by my leader and agree,” Mathis typed. “These are serious allegations of sexual misconduct. There is no time when behavior as described is acceptable — in in the workplace or social setting.”

The Iowa Republican Party’s chairman and a Republican senator from northwest Iowa have also called for Boulton’s resignation. State Senator Rick Bertrand of Sioux City said after Boulton preached a “no tolerance” policy over accusations against Republicans in the senate, it would be hypocritical for Boulton to remain in the Iowa Senate.