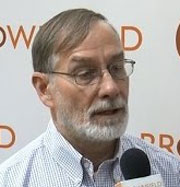 A trade team from nations in the Asian Pacific rim is in Iowa this week, visiting a pair of ethanol plants, touring farms, and a feed mill in Grinnell.

Iowa Corn Board Promotion Director Roger Zylstra is hosting the group of government and industry representatives on his farm near Lynnville. He says they’re mainly interested in dried distiller’s grains, or DDGs, a byproduct of making ethanol.

He says this visit takes on high importance, given the recent trade tensions between the U.S. and China. Zylstra says it also gives Iowa growers a chance to reestablish good relations with the Asian Pacific nations.

“We’re going to be the reliable supplier and we’re going to try to get the governments on both sides to cooperate as much as we can,” he says. “We’re here to provide the DDGs, the corn, the soybeans, the pork, whatever they need.” Zylstra says it’s a thrill to host these visits.

“That’s what Iowa Corn and the U.S. Grains Council, we’ve worked for years and years to establish and build the markets and the relationships that we have and continue to put a lot of emphasis on that,” he says. The trade group is also scheduled to stop at the Iowa Corn office and Iowa State University in Ames.