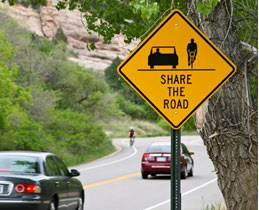 A report from the Iowa Bicycle Coalition says six bicyclists were killed in crashes with vehicles on Iowa roads last year, another 15 cyclists were badly hurt.

Lindsey Pavlick, a spokeswoman for AAA-Iowa, says now that the warmer weather has arrived, motorists across the state can expect to see more bicyclists in traffic.

“Cyclists’ deaths are on the rise and a big reason for that is there’s more bicycles on the road,” Pavlick says. “It’s so important, especially if you’re a motorist, to put down the cell phone, eliminate those distractions, and for bicyclists and motorists, examine your habits while on the road so we can all get to our destination safely.”

The number of cyclists killed nationwide is on the rise, with 840 bicyclists killed in crashes in 2016, the highest number on record since 1991, according to the National Highway Traffic Safety Administration. Pavlick says cyclists are well aware of the risks.

“In a recent survey, AAA found that bicyclists are most concerned about being hit by a vehicle and distracted drivers,” Pavlick says. “That’s understandable being that distracted driving is so prevalent among motorists these days and is a huge traffic safety concern.”

Traveling on the road requires care and courtesy, she says, and it’s imperative for motorists and bicyclists to be aware of each other. “Unfortunately, there’s a lot of people out there who don’t know the rules of the road and they are not aware that bicycles are vehicles,” Pavlick says. “It’s so important that motorists and bicyclists know the rules of the road and share the road so everybody can get to their destination safely.”

Cyclists need to follow the same rules of the road as everyone else, including riding in the same direction as traffic and following all the same traffic signs and signals, she says. Motorists need to stay alert, avoid distractions and when passing a cyclist, slow down and give at least three feet of clearance.