You are here: Home / Human Interest / New stamps can be scratched to release a classic summertime smell 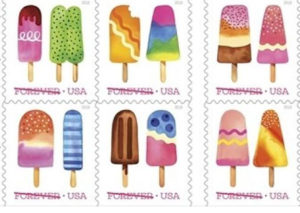 Just as temperatures start to climb and Iowans switch on their air conditioners, there’s a refreshing reminder of a cool summertime treat.

Steven Cunningham, a spokesman for the U.S. Postal Service in Omaha/Council Bluffs, says scented letters may soon be common again.

“We are coming out with the first-ever scratch-and-sniff stamp,” Cunningham says, “which will add to the sweet smell of summer for letters of love, party invitations and other mailings for the Postal Service.” The stamps depict 20 watercolor illustrations of frozen treats on a stick in an array of colors and tantalizing flavors — from kiwi to watermelon to strawberry.

“Each stamp will depict two popsicles and there will be 10 stamps in the collection,” he says, “and they will all have the same scratch-and-sniff scent.” It’s still not clear exactly what the scent will depict, outside of the “sweet smell of summer.” The series of “Frozen Treats Forever” stamps will be unveiled next month. Cunningham says it’s becoming a tradition to release unusual stamps at least once a year.

“Last year, we revealed the solar eclipse stamp,” Cunningham says. “You touch the stamp and it would change colors. This year, we decided to try something new and we’re going to go with the scratch-and-sniff and popsicles.”

The new stamps will be unveiled June 20th and should be in post offices across Iowa soon afterwards.