You are here: Home / News / Three rivals, some endorsers call on Boulton to exit governor’s race 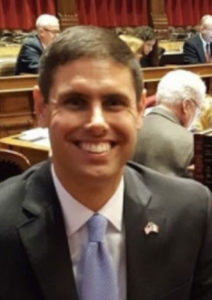 Three of Democratic gubernatorial candidate Nate Boulton’s rivals are calling on him to exit the race after The Des Moines Register published allegations from three women who say Boulton touched them inappropriately.

Thirty-eight-year-old Nate Boulton issued a written statement early Wednesday afternoon. He apologized to the women, but added that he “doesn’t have the same recollection” of the incidents they described to the newspaper.

Later Wednesday, Boulton told WOI Television he was “hurt and embarased…and more than a little surprised” when he read The Register’s article about an incident in 2015 and two others from Boulton’s college days.

Democratic gubernatorial candidates Cathy Glasson, Andy McGuire and Ross Wilburn have all called for Boulton to end his campaign. At the beginning of the day, Boulton had the endorsements of 23 state legislators, but a handful have publicly withdrawn their backing.

Senator Pam Jochum, a Democrat from Dubuque who appears in a Boulton campaign ad, said the allegations of sexual misconduct against Boulton are “serious and compelling.” Jochum did not directly call for Boulton to end his campaign or withdraw her endorsement, but she said Boulton “has an important decision to make.”

The two women in the Democratic Party’s race for governor issued written statements yesterday condemning the actions described in the newspaper. “Nate Boulton’s behavior disqualifies him from leading our state government,” Glasson said.

Boulton’s three male competitors issued statements saying they do not tolerate sexual harassment, but Wilburn was the only one to explicitly call for Boulton to leave the race.

The woman elected last November to lead Democrats in the Iowa Senate issued a statement saying “sexual harassment and misconduct should not be tolerated by anyone, anywhere,” but Senator Janet Petersen of Des Moines did not call on Boulton to step down.

“The allegations reported in the Des Moines Register are a serious matter for Senator Boulton,” she said. “These allegations are detailed and compelling.”

One of the three Democratic candidates running in Iowa’s third congressional district issued a statement, too.  Eddie Mauro posted a tweet that concluded with this: “You don’t get to act this way and still be a Governor or State Senator.”