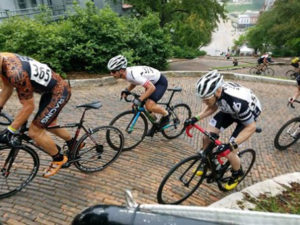 Bicycle racers from across the country have gathered in southeast Iowa this weekend for four days of racing in three cities. Steve Frevert of the Greater Downtown Partnership in Burlington says there are three “Burlington Road Races” today. The third is for the professional cyclists only.

The racing begins at three this afternoon. The start and the finish lines are at the Burlington Post Office. The racing continues tomorrow with the “Snake Alley Criterium” starting at 3:40 p.m. The course runs on city streets, including the infamous “Snake Alley” — forcing cyclists to make a 60-foot uphill climb on a street with five sharp curves. The Snake Alley Criterium is considered one of the most physically challenging races in the Midwest.

Earlier on Saturday, starting at noon, the cyclists will race up two city blocks in “Cobble Climb” sprints.

“So, it’s a timed run — just one after another,” Frevert says. “Not all the people racing at once.”

On Sunday, the cyclists move on to Muscatine for the Melon City Criterium. On Monday, the Quad Cities Criterium will be held in Davenport. As grueling as just one of these races may be, many riders compete in all of them. The top finishers will get medals and cash prizes.

“I think last year we had people from 23 different states and seven or eight foreign countries come for this,” Frevert says.

An estimated 66 million Americans are bicyclists. A fraction of them ride on the professional circuit.