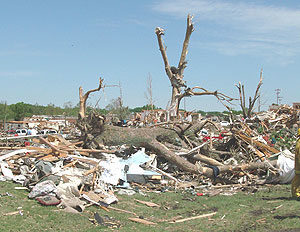 Damage after the Parkersburg tornado in 2008.

Today marks the tenth anniversary of the massive, killer tornado that destroyed much of the northeast Iowa town of Parkersburg.

Chris Luhring, who’s now Parkersburg’s city administrator, was the police chief on that terrible Sunday in 2008. Luring says local police, firefighters and other first responders were immediately on the job after the storm hit, but they were in over their heads.

“We were pretty quickly overwhelmed by the amazing responses from the EMS, the fire crews, law enforcement, state patrol, Iowa Homeland Security, from all over the state of Iowa,” Luring says. “It was pretty amazing to see sheriff’s deputies from an hour-and-a-half, two hours away who got here quickly.” Luring says he has no idea how many people lent a hand in the hours, days and weeks after the twister hit.

“It’s hard to put it into context even today,” Luring says. “There’s so many people, to be quite honest, we have no idea that they were here. We were so busy. There’s hundreds and thousands of people who came to Parkersburg that possibly were never told ‘thank you.’ Ten years later, we haven’t stopped saying ‘thank you.'” Luhring says there will be no formal observance for the tenth anniversary of the tornado today.

“We do have a church service that’s scheduled for Sunday at Parkersburg High School,” Luring says. “Basically, all the churches in town got together and coordinated an effort to have a remembrance service, a thank you to God service is probably the best way to put it.” The National Weather Service said the tornado was three-quarters of a mile wide with winds of up to 205 miles an hour. More than 400 homes were damaged or destroyed. The tornado killed seven people in Parkersburg and two others in New Hartford, leaving at least 70 injured.

“If there’s anything we desire to do, it’s to remember those people by working hard and continuing to recover and still promoting storm safety and still saying thank you to the world for helping Parkersburg,” Luring says. “I really like to call Parkersburg Iowa’s town because it really seems like without all of Iowa, we wouldn’t really exist.”

In the past decade, Luhring says the community has bounced back. Parkersburg is now the home of a new $2.3 million sports complex and several new businesses, including a hotel and a car dealership.

Here are some related stories: