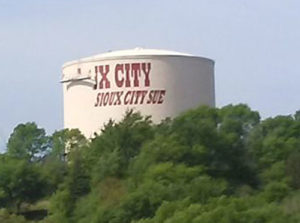 A water tower in Sioux City is getting a new look, with a familiar name that may spark the memory of a familiar song and movie.

“They are putting: ‘Sioux City, Home of Sioux City Sue’ and they will do three panels like that around the perimeter of the tank.” That’s Rick Mach, a spokesman for the City of Sioux City. “Sioux City Sue” was a 1945 song featured in a 1946 movie of the same name. Mach says the city had hoped to paint music from the song on the water tower as well, but was unable to get copyright permission. Mach says it’s an “off-beat” idea that will hopefully catch some eyes and spark some inside-the-car conversations.

“We tried to do large enough letters that you can see if from the interstate,” Mach says, “because we have all those visitors that pass through the area.” Work on the tower started at the end of April. The job should be finished by mid-June.

Dick Thomas recorded “Sue City Sue” and it went was number one on the country charts for four weeks in 1945. Gene Autry sang the song in the movie. Bing Crosby also had a hit with the same song.