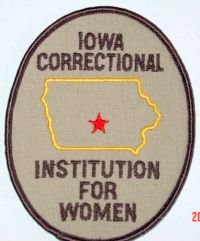 A children’s garden at the Iowa Correctional Institution for Women at Mitchellville is nearing completion thanks to the efforts of students from Iowa State University.

Julie Stevens, an ISU professor of landscape architecture, says the garden is located just outside the prison’s visiting room. Stevens notes, young visitors sometimes spend all day at the prison after being in the car for hours.

“This garden really gives children and other visitors an opportunity to be physically active, do different kinds of activities with their mom or aunt or grandmother, whoever they’re visiting,” Stevens says. “It’s also a distraction. We see it as a positive, natural distraction from the rest of the institution. We can’t forget that we’re working inside of a prison.”

While she initially thought prison management would be tough as nails, Stevens says it was refreshing to work on this garden project.

“The Iowa Department of Corrections is incredibly progressive, they’re one of the most progressive correctional units in the country,” Stevens says. “They’re very much focused on treatment and helping these women, and the men in the men’s institutions, really better their lives and get back out into society more prepared to be a part of our communities.”

Stevens hopes there can be future collaborations between the design students from ISU and the women’s prison.

“This is a huge population. There’s over 700 women in there. It’s a really large campus and there’s lots of needs for different types of outdoor spaces,” Stevens says. “We’ve built other therapeutic gardens. They’re very well used and received. Certainly, we’d like to see more trees, more recreation spaces.”

The goal is to have the garden completed within a few days. A dedication ceremony is slated for Friday, June 1st.