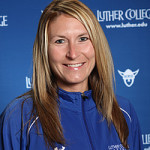 Luther’s season came to an end Sunday as the Norse split with Illinois Wesleyan University in Oklahoma City. Needing to win two games to advance to the NCAA III National Championship series, the Norse defeated the Titans 5-2 and then were defeated by a final of 5-1 and were eliminated from the tournament. The third place finish was the highest finish at the national finale in school history. Luther also finished the year with a school record win total of 43-11.

“This has just been an incredible week for us”, said Luther coach Renae Hartl. “This experience with this group and this team I could not have asked for anything more for them and to be able to experience with them.”

In the first semifinal game, the Norse scored five runs on nine hits. Anna Strien hit a two-run home run in the third. The Norse added three in the fifth en route to the victory.

Samantha Bratland went the distance in the circle and improved to 28-6. Bratland spread seven hits, walked one and struck out one.

In the nightcap of what turned out to be a double header, Titans ace Ally Wiegand held the Norse to three hits, two of which came in the bottom of the seventh. Ashley Burrows hit a single to left field and two batters later, Blake Banowetz drove in Burrows with a double.

Illinois Wesleyan scored two in the third and three in the top of the seventh. The Titans tallied eight hits.

-Darin Svenson from KDEC contributed to this story