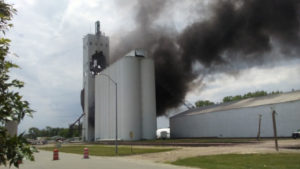 One person was injured in a grain elevator explosion in South Sioux City, Nebraska, Tuesday afternoon.

South Sioux City police chief Ed Mahon says the explosion happened at 12:55 p.m. at the Anderson Grain Elevator. He says they don’t know what caused the explosion and it was mostly out, but crews had to find and shut off the gas to the elevator to get the fire all the way out.

A gaping hole was blown into the top and side of the structure and homes located east of the building were evacuated because of the threat of a possible second explosion and elevator collapse.

Chief Mahon says there were three employees at the elevator when the explosion happened. He says one was taken to the hospital with non-life-threatening injuries. Two others were not injured and have been interviewed about what they saw. The injured employee’s name has not been released. 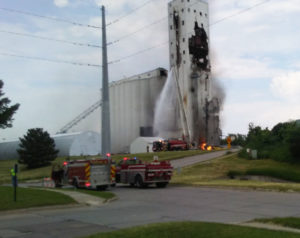 Firefighters had concerns about the elevator collapsing.

Mahon says there was a big concern about part of the building collapsing on firefighters.

“They said they saw some concrete moving that appeared to be bulging out,” Mahon says. He says they were being cautious until they could do something to take the concrete down. Firefighters from Sioux City, Dakota City, Homer and Winnebago responded to help South Sioux City.