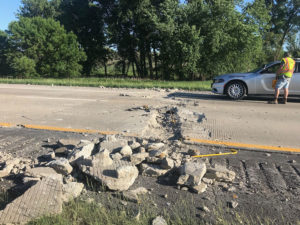 Buckled pavement on I-80 near Anita. (DOT photo)

The Iowa Department of Transportation is having an early summer blowout — but its not a party for anyone.

DOT assistant director of maintenance, Ken Morrow, says it is a lot of extra work as high temperatures caused the pavement to buckle.

“There are several across the state — some of them pretty severe,” according to Morrow. The buckling or blowouts happen when water gets under the pavement and heats up and the steam pushes up the pavement like the top coming off a boiling pan of water. Morrow says they try to prevent this from happening using drains along the roadways, so it is not there to heat up and blow.

Morrow says the concrete is most susceptible to the problem. “Asphalt is a lot more forgiving — but there are very few roads that are full-depth asphalt – – so those will kind of push and roll,” Morrow explains. But he says most of the roads are poured concrete that is capped by asphalt and the water gets below the concrete and heats up and causes it to pop. The blowouts usually happen in the early afternoon when the temperature hits its peak for the day.

“Very few of them pop after sunset, so if you can get by until about nine or ten o’clock, you are pretty safe again,” Morrow says. “Often times it’s just about the time that the crews are going home that they happen. So, hopefully it doesn’t happen after they are gone and you spend an hour trying to get them back.” The extreme heat we’ve had in the high 90s and triple digits is the other ingredient along with the water that mix to create the problem.

“You are not going to see very many happen if it’s below 100. So, it’s got to be starting push that 100-degree air temperature — which will show you well up into the hundreds — 120’s maybe even 130 degrees in pavement temperature,” Morrow says. The blowouts are something that usually are a possibility later in the summer — not a few weeks after the state crews removed the snow-fighting equipment off their trucks.

“I mean you think you’re done with one thing,” Morrow says, “I mean we fought winter clear into April this year and it seem like it turned on a dime into these high 100-degree temperatures. And we’re right back in a major emergency type of situation. Dealing with blowups can be very critical to the safety of that traveling public.”

Morrow says they usually come out and push down the buckled concrete and put on a temporary patch to get traffic moving. He says they most often have to come back later and do a full cut of the concrete to fill in where the pavement buckled.