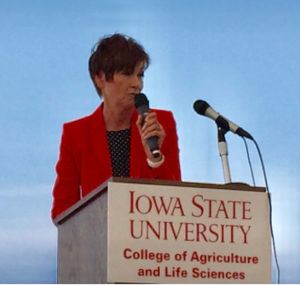 There was a gathering in rural Boone today to mark the five-year anniversary of the State of Iowa’s “nutrient reduction strategy.” It’s aimed at getting Iowa farmers to voluntarily take steps to reduce farm chemical runoff into Iowa waterways.

“It’s a dynamic plan. It’s changing,” said Jim Gulliford, an EPA administrator based in Kansas City. “It’s getting better and it’s working…to address the big challenge of nutrient enrichment in Iowa’s waters…all the way to the Gulf of Mexico.”

The state’s “nutrient reduction strategy” is an effort to avoid federal regulation of nitrogen and phosphorus, two chemicals used to boost crop production. Critics say a “dead zone” in the Gulf of Mexico is caused by farm chemicals washing down the Mississippi River.

There’s still a long list of “impaired” Iowa waterways that are less than desirable for drinking, fishing or swimming, but state officials say the past five years have been productive as real-life demonstration projects are showing results, plus Iowa farmers have spent millions of dollars of their own money on water quality measures in their fields.

“We have much more to do, but I know that we’re on the right track, ” said Mike Naig, Iowa’s Secretary of Agriculture.

Naig said it’s time to “scale up” the effort.

“We have worked hard over the last five years to build the knowledge base and secure the funding needed to move from a demonstration phase to an implementation phase of this project,” Naig said.

In her first official bill-signing this past January, Governor Kim Reynolds approved spending more than $280 million in state funds over the next 12 years on water quality measures.

“Using the science-backed Nutrient Reduction Strategy as our roadmap, we’re going to continue charging forward with our efforts,” Reynolds said.

Bill Ehm of the Iowa Department of Natural Resources said new equipment is being installed to monitor nitrate and phosphorus levels in Iowa surface waters.

“When the strategy started, we had eight real-time sensors for nitrate. Today, in this state, we have 70,” Ehm said. “That is thought to be approximately one-third of all the real-time nitrate sensors nationwide.”

Ehm indicated there have been no sensors to check for phosphorus levels in Iowa waterways, but two dozen are being deployed this year and will start providing phosphorus readings in 2019.

Ehm and the others made their comments late this morning during an event at Iowa State University’s BioCentury Research Farm near Boone.