You are here: Home / Fires/Accidents/Disasters / Group wants lawmakers to do more to protect bicyclists 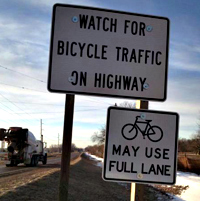 Many Iowans are getting their bicycles tuned up and ready for a summer full of riding.

Cycling enthusiasts are also hoping it’s a much safer season than recent years. According to the Iowa Bicycle Coalition, 11 people died in bicycle crashes in the state in 2016. Nine of those crashes involved collisions with vehicles. Roger White, with the group Cedar Valley Cyclists in Cedar Falls, says lawmakers could do much more to protect people pedaling on Iowa’s highways.

“It’s very difficult to prove reckless driving, so there’s a void in the law,” White says. “One of the things that would help is if the legislature would pass full-lane passing of bicyclists and, at the same time, increase the penalties for driving distracted.” While White is suggesting cars be required to move into another lane while passing bikes, others have called for a three-or-five foot passing clearance.

“Neither of those are enforceable because you have two vehicles moving down the road at the same time and the vehicle driver is sitting way over on the left side – it’s very difficult to judge the distance from the opposite side of the vehicle while you’re going 55 or whatever miles an hour,” White says. “The only thing that’s clear is you know when you’re in the opposite lane or not, so full-lane passing is the solution to that.”

White and many other bicyclists are also calling for greater penalties in Iowa for motorists who are found at fault for hitting a cyclist. White says, many times, a motorist is only charged with failure to yield – even if the cyclist is killed or seriously injured.