You are here: Home / Fires/Accidents/Disasters / High winds rock the boats and everything else at Clear Lake (video) 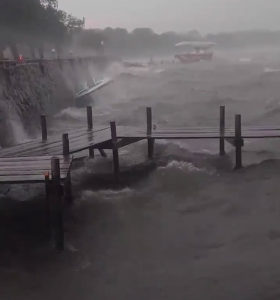 While many Iowa cities set new record high temperatures through the Memorial Day weekend, other areas of the state had rough weather.

Waves crashed into the Sea Wall near the Lady of the Lake in downtown Clear Lake as severe weather ripped through the Clear Lake-Mason City area between 5-and-6 o’clock on Monday night. Wind gusts as high as 70 miles-an-hour resulted in numerous trees and power lines being downed throughout Cerro Gordo County, as well as boats being damaged on Clear Lake.

Alliant Energy at one point reported over 9,000 customers in the Mason City-Clear Lake area were without power, with power restored to most of those customers late Monday night or early Tuesday morning.