You are here: Home / Fires/Accidents/Disasters / High water adds extra concern for those tubing on rivers 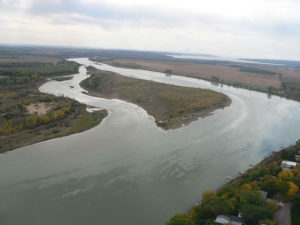 Iowans are being reminded about the risks of inner tubing after an Omaha 15-year-old died Monday while tubing at Lake Manawa in Council Bluffs.

Todd Robertson, a spokesman for the Iowa Department of Natural Resources, says with heat indices soaring lately, even though you’re surrounded by water, you still need to drink plenty of fluids while tubing.

“You have to drink enough water because heat exhaustion can come onto you,” Robertson says. “Even though you’re relaxing in a tube and just floating down the river, if that’s what you’re doing, it still takes a little bit of energy and plus you’ve got the sun beating down on you, so you have to stay hydrated.”

Robertson says inner tubes can be difficult to control, especially with all of the recent rain and the swift-moving water. “You have your hands and you have your feet, you don’t have a paddle, so you’re basically at the mercy of the current when you’re in a tube,” he says. “Some of these rivers that are really high in the state right now, you have no business being on anyway, and if you’re on a tube, chances are you’re gonna end up in some of that debris.”

Robertson says higher water levels often hide downed trees and branches. He says river users can enjoy the scenery but need to keep an eye downstream to avoid any hazardous surprises. He also suggests bringing along a buddy and letting those at home know where you’re going.