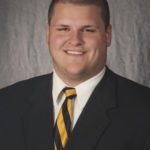 The Rimington Trophy is awarded to the nation’s premier center in college football and is presented annually by the Boomer Esiason Foundation.

The Rimington Trophy winner will be announced on Jan. 12, 2019, at the Rococo Theatre in Lincoln, Nebraska. The center with the most first team votes will be determined the winner.

Render and the Hawkeyes open their season on Sept. 1 against Northern Illinois.