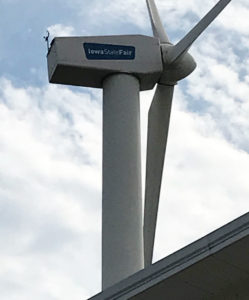 MidAmerican Energy is seeking regulatory approval for its 12th major wind turbine project in Iowa. Adam Wright, MidAmerican’s president and CEO, said once the project is done, the company’s Iowa customers will have access to 100 percent renewable energy for their electricity.

“For us, it’s a capstone of our efforts since the early 2000s to a leader in renewable energy,” Wright said this morning. “…This is no doubt historic.”

The company’s 11th wind turbine project is currently underway. MidAmerican is calling this next project “Wind 12” and the new turbines will be erected at up to four sites around the state.

“We plan to officially file the Wind XII project with the Iowa Utilities Board this afternoon and, if it’s approved, we will invest $922 million,” Wright said, “and complete the project by 2020.”

There are “lasting benefits” to harnessing wind power to provide electricity, according to Wright. 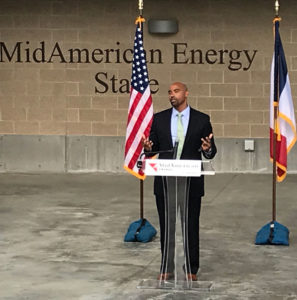 “With wind, we don’t need to buy fuel to make the energy. This is a big reason why MidAmerican’s rates are 37 percent lower than the national average and it’s a big reason we’ll be able to maintain those rates at a very low and competitive level going forward. That’s a huge benefit for our customers,” Wright said.

“In addition, to date wind has allowed us to cut the amount of carbon we produce nearly in half since 2003. After ‘Wind XII’ is complete, we’ll be producing 65 percent carbon than we were 15 years ago. That’s a clear benefit for our environment.”

Wright spoke at a news conference near a wind turbine MidAmerican installed on the state fairgrounds. Governor Kim Reynolds, who joined Wright for the announcement, said energy intensive businesses like manufacturers and tech companies need low energy rates to be successful and this project “launches Iowa to the top of the charts.”

“Iowa leads the nation in the percentage of energy and that leadership position has helped create a competitive advantage for our state,” Reynolds said.

“Here’s an important fact: no other rate-regulated utility in the nation owns more wind power capacity than does MidAmerican Energy. None,” Ralston said during the news conference. “That’s a big deal.”

Last year, about half of MidAmerican Energy generates comes from wind turbines. Once the company’s 12th wind project is completed, MidAmerican will have invested more than $12-billion in wind energy generation and secured about $12 billion worth of government tax credits for wind production.