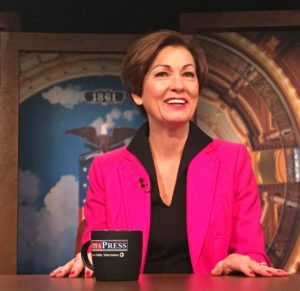 Governor Kim Reynolds is signing a bill into law this afternoon that’s designed to eventually cut Iowans’ income taxes by about $400 million a year.

“Generational tax reform — I’m really excited about that,” Reynolds said during an interview with Radio Iowa this morning.

The bill would cut individual income taxes by an average of 10 percent in 2019. In 2020 and beyond, the tax reductions outlined in the law will only take effect if state tax collections grow by at least four percent each year.

“I talked about in the Condition of the State that we have an obligation to pass on the savings from the federal tax reform,” Reynolds said. “Because of our tie to federal deductability, the fact of the matter is if we hadn’t done anything, Iowans were going to see their taxes go up.”

Iowans have had the ability to take a state income tax deduction equal to the amount of federal income taxes they paid. So when federal taxes are lowered, Iowans wind up paying more in state income taxes if lawmakers don’t make adjustments. The bill Reynolds and her Republican colleagues in the legislature crafted would eventually get rid of that deduction, as it makes Iowa’s income tax rates appear higher than they are when compared to other states.

Reynolds unveiled the framework she wanted to see in a tax plan in early February, but it wasn’t until May 5 that Reynolds and Republican lawmakers settled on a compromise plan.

“It’s a process,” Reynolds said this morning, praising key legislative leaders like House Speaker Linda Upmeyer and Senate Majority Leader Jack Whitver by name. “…They stayed at the table. We walked through it. We talked about areas where we had common ground and everybody had to give a little bit and everybody did, but everybody, I think, was very happy with the end result.”

In late February, Senate Republicans proposed nearly a billion dollars in income tax cuts for individuals and corporations. Republicans in the House countered in March with what they called a “more prudent” plan that was closely aligned with the governor’s framework. In the end, elements like cutting Iowa’s corporate income tax rate are included, but do not take effect for two years and only if the state’s economy is growing.

“We were able to bring the House and Senate together and pass historic tax reform,” Reynolds told Radio Iowa this morning.

Reynolds is holding an event at a business in Hiawatha to formally sign the tax bill into law at 2:15 this afternoon.

Democrats say the plan provides a tax windfall the wealthy and special interests, while a third of Iowans get no tax relief or may wind up paying more, since the law imposes sales taxes on Netflix, mobile phone apps and other “e-commerce.”

Democrat Dave Jacoby, a state representative from Coralville, called it a “tax scam that will make the state’s budget crisis even worse.”