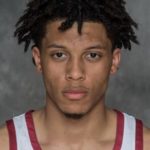 Iowa State’s Lindell Wigginton and Iowa’s Tyler Cook are returning to school after removing their names from the NBA Draft.

Wigginton recorded one of the best freshman seasons in school history. He averaged 16.7 points, ranking among the Big 12’s top-five scorers and second among the league’s freshmen. His average broke Iowa State’s freshman record, as did his 13 games scoring 20 or more points. He became just the eighth freshman in Big 12 history to score more than 300 points in conference action.

Wigginton, who also averaged 3.7 rebounds and 2.8 assists, earned All-Big 12 honorable mention honors and was a member of the Big 12 All-Newcomer Team.

“I chose to come back to Iowa State because I didn’t want to settle,” Wigginton said. “I know where I can help take our team this season and I want to be considered a winner. I am determined to be one of the best guards in college basketball and want to have a chance to play in March Madness and compete for a national championship for the best fans in college basketball.”

Cook was the leading scorer and rebounder for the Hawkeyes as a sophomore. He ranked seventh in the Big Ten in double-doubles (7), eighth in field goal percentage (.566), 11th in scoring average (15.3), and 12th in rebounding (6.8) as a sophomore in 2017-18. Cook’s scoring and rebounding averages led the Hawkeyes as a sophomore. The St. Louis native tallied 20 points or more a team-best nine times in 2017-18, seven of which came against Big Ten opponents. Cook was recognized as an honorable mention All-Big Ten performer as a sophomore and was voted to the Big Ten All-Freshman Team honoree in 2017.

“I am excited to return to Iowa for my junior season,” said Cook. “I am grateful for the opportunities and feedback that I have received from NBA personnel. I am thankful for coach McCaffery and the coaching staff for their assistance and patience with me during this process.”