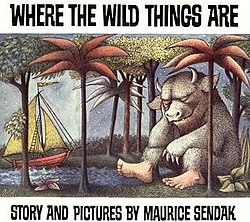 The author and illustrator of one of the most popular children’s books of all time is the subject of an exhibit in eastern Iowa.

More than 20-million copies of “Where the Wild Things Are” by Maurice Sendak have sold globally since it was first published in 1963.

Tim Schiffer, director of the Figge Art Museum in Davenport, says the book has universal appeal.

“I think one reason Maurice Sendak is so loved is that he really caught the dark side of childhood and the monsters,” Schiffer says. “He gave a voice to childrens’ fears and their uncertainties.”

The exhibit of Sendak’s work contains 50 illustrations — most of them originals and most of them depicting characters from “Where the Wild Things Are.” 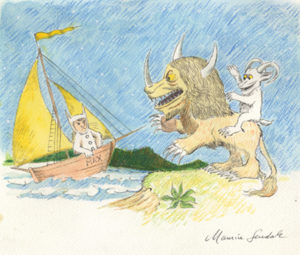 If you haven’t read the book, or can’t remember if your parents read it to you as a bedtime story, Schiffer explains the plot.

“It’s the story of Max, a little boy who’s bad,” Schiffer says. “His mother sends him to his room and he sails off to an island that’s populated by monsters, where they have a wild rumpus.”

The exhibit also features drawings of characters from some of Sendak’s other books, and even glimpses into how he developed as a young artist, including a couple drawings Sendak made of scenes from Shakespeare’s Hamlet.

He drew them in high school, as a way to pass his English class. At the time, he didn’t want to write essays, so the teacher let Sendak express himself visually.

“It’s fun to see him, not in the printed way but just as an artist, just doing drawings,” Schiffer says.

The book was originally going to be called “Where the Wild Horses Are,” until Sendak realized he couldn’t draw horses. So, he changed one word and the project evolved.

When kids sent him fan mail, Sendak would sometimes send them original drawings of characters from the book. Staying true to his imagination, the museum also includes an interactive studio where kids can do art activities inspired by “Wild Things.”

The exhibit will be at the Figge until mid-August.