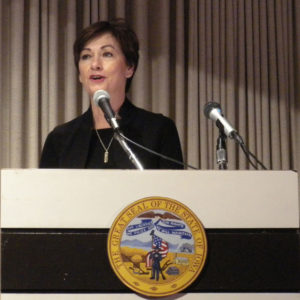 Governor Kim Reynolds has taken action on a dozen bills today, wrapping up her review of legislation passed by the 2018 Iowa General Assembly. Among the items tucked in a massive budget bill is a requirement that the University of Iowa Credit Union ditch that name, since it’s not associated with the university.

“I don’t think that’s unreasonable to ask for that, “Reynolds said earlier this week in Boone during a question-and-answer session with reporters.

State payments to local schools, plus state spending at the public universities and community colleges are outlined in the batch of bills Reynolds signed into law today.. Reynolds also approved spending plans for multiple state agencies, including the Department of Natural Resources and the DOT. Most state agencies will be operating under “status quo” budgets, although legislators did set aside an extra two-million dollars for the state’s park system, to avoid closures.

Reynolds did use her item veto authority to reject some legislative proposals. Republicans had voted to shut down a pilot program that supporters say is reducing the number of people who sit in jail while awaiting trial. Reynolds took action to continue the program through December 31, then ordered the agencies involved to review its effectiveness. Reynolds said in a veto message that she supports efforts to come up with a fairer system for people awaiting trial for non-violent crimes, but the governor indicated legislators had raised legitimate questions about how the program works. The program is being used in Polk, Scott and Woodbury Counties. Linn County delayed participation after lawmakers started raising concerns.

The governor vetoed one bill out of all the bills passed by the 2018 legislature. It’s a bill that passed the House and Senate unanimously and it dealt with how Iowa’s stock insurance companies may split into two separate firms. Reynolds said a provision stuck into the bill would have led to more disruption in Iowa’s insurance market by allowing a single person who is self-employed to qualify for group insurance policies.

Also today, Reynolds announced Jake Ketzner, her chief of staff, is leaving “to pursue opportunities outside state government.” Reynolds is promoting her senior legal counsel and chief policy advisor. Ryan Koopmans will become the governor’s chief of staff on June 9.