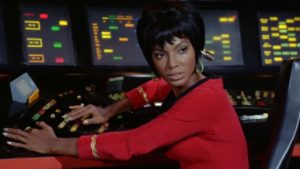 Nichelle Nichols in the role of Uhura on “Star Trek”

One of the stars of the original TV series “Star Trek” is in Iowa this weekend, reflecting on a long, prosperous life which she says has been one bold adventure after another.

Nichelle Nichols, who played Lieutenant Uhura, a bridge officer on the Starship Enterprise, is considered by many as not just an iconic actress, but as a heroine in the civil rights movement of the 1960s.

“I’m honored to be thought of that way,” Nichols says, “but it was just my life. That’s the way I was.”

Nichols planned to leave the show after the first season, but had a chance meeting with a fan, Dr. Martin Luther King Junior, who convinced her to stay on as she was such an incredible role model in the multiracial cast. 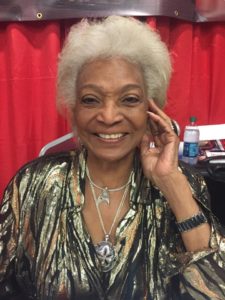 Nichols at a recent Comic Con

In later years, Nichols helped NASA recruit women and minorities to join the astronaut corps. She’s credited with bringing aboard Sally Ride, who became the first American woman in space, as well as Mae Jemison, the first black woman in space.

Nichols says her first love is musical theater and she toured the country in the 1990s singing in a one-woman tribute to female jazz and blues singers.

“I sing, I’m a dancer, I’m a ballerina, I talk too much, I’m an actor,” Nichols says, laughing. “I’m all of those things. I’m in all of those areas that are fascinating to me.”

The 85-year-old Nichols is still involved in the television industry. Lately, she’s been crafting a potential new show to be called “Noah’s Room,” about a white astronaut who looks back on his experiences, including the black family who adopted him and, in her words, saved his life.

“I’m still working on it and I’m developing it and as I work on it, things pop up out of it, it’s real fun,” Nichols says. “If I’m involved in the producing of it or the directing of it, I’ll be really very happy.”

Speaking with Radio Iowa at the Wizard World Comic Con in Des Moines, Nichols says it’s energizing to see so many fans lining up to see her, to get an autograph or a selfie with her, even more than 50 years after Star Trek debuted. It’s an incredibly loyal fan base, “just wonderful,” she says.

“You would be shocked at the many people that are Star Trekkers and know more about Trekdom than I do,” she says.

The original TV show continues to spawn spin-offs and movies, but also lives on in reruns and is still finding new, adoring viewers. In the autograph line Saturday was a young girl of around eight, clad in boots and a red skirt with a triangular gold emblem on the black lapel, a miniature version of the uniform Nichols wore as Uhura decades ago.