You are here: Home / Human Interest / Some Iowans looking for cemetery plots in smaller towns to save money 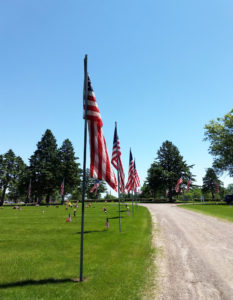 A lot of people bargain hunt before making a purchase — and that hunt now includes shopping for a final resting place.

Iowa State University regional planning expert Carlton Basmajian discovered the phenomenon of “cemetery shopping” while doing a land use study for the city of Perry’s cemetery.

He says the operators of the cemetery have noticed people coming there from Des Moines looking for a cheaper burial plot. Basmajian says being laid to rest in a smaller town has its advantages.

“They told us they’re seeing people come up and say “well it is half the price to buy a plot and half the price to open a grave than it is in metro Des Moines’,” Basmajian says. He is associate professor of community and regional planning and says the metro areas of the state have seen land developed all around cemeteries, leaving them will less room to expand. And he says the cities only revenue to run the cemeteries comes from selling the plots and services associated with them.

Basmajian says smaller rural towns don’t have the same land use problems and can charge less. “So you have an outmigration — it’s crazy — of people seeking these cheaper cemeteries. And Perry is not that far from the metro, it’s in Dallas County,” Basmajian says. It’s around 40 miles from Des Moines to Perry. Basmajian says Perry has looked at how to handle those from out of town who want to be buried there to be sure their budget doesn’t get overstretched.

He says they looked at the city charging more for those who come in from the outside. It would still be cheaper for people coming in and would provide some more funds for upkeep of the gravestones. Basmajian says upkeep at cemeteries can get expensive — especially for gravestones.

“They degrade. They are affected by the freeze-thaw cycle, they get run over by cars, they get toppled by vandals,” Basmajian explains, “and in a lot of cases, especially the older graves, there’s nobody left in the family to even contact and say what do you want to do. So, the city is left trying to prop these things back up.” He says as the cemeteries fill up, there are more stones to take care of and less opportunities from selling new plots to pay for the upkeep.