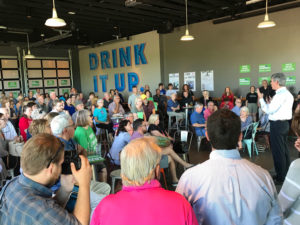 On this final weekend before the Iowa Primary Election, the five Democratic candidates for governor began making their final pitches for votes, while Republican Governor Kim Reynolds said she’ll be ready to debate the candidate Democrats pick.

A large crowd gathered in an Iowa City brew pub Sunday afternoon to cheer on Fred Hubbell, the perceived front-runner in the race.

“We need to make sure everybody that we know gets out to vote,” Hubbell said. “The more Democrats that get out to vote, the more scared, the more worried we can make that Republican Party. We need to show that we are united.”

At the same time, rival John Norris was being cheered on by a crowd in a different Iowa City bar. Norris has sharpened his message in the closing days of the contest. During a speech Saturday night in Albia, Norris emphasized his rural roots in Red Oak and his work for past Democratic winners like Tom Vilsack and Norris suggested Hubbell’s wealth will be a liability this fall. 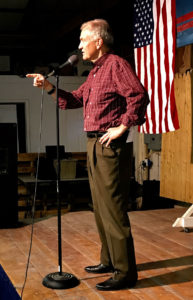 “The argument in the primary that: ‘I’m most electable because I can spend $7 million’ — that’s what one candidate has spent on this race,” Norris said. “It may work for a primary, but think…as you’re door-knocking next fall. Are you going to make the argument because they have a lot of money and they can spend a lot of money?”

Hubbell is the former head of Younkers who then served as president of the insurance company his great-great grandfather founded. Hubbell has contributed $3 million of the $7 million raised for his campaign.

Hubbell said his goal has been to build a campaign that could compete with Republican Governor Kim Reynolds.

“We’ve worked hard to do that in all 99 counties,” Hubbell said Sunday afternoon. “We have over 3000 contributors to our campaign. My wife and I are the biggest contributors. We said we always would be, but we have several thousand people supporting us because we’ve worked hard to reach out to people, listen and learn and share our message.” 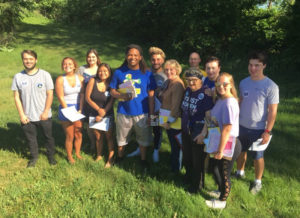 Cathy Glasson hosted a crew of staff and volunteers in her Coralville home Sunday morning before the group set off to knock on doors in Glasson’s neighborhood.

“There are really excited voters out there that want to get to the polls and our whole campaign was based on the premise that we want people to get excited, so that they will go to the polls and even be willing to wait in line to vote,” Glasson said. “You know, I’m feelin’ it.”

Jason Mattie of Pella was among the Democrats who gathered in Albia Saturday night for a seven-county fundraiser. Mattie sees grassroots enthusiasm about the party’s prospects in the fall.

“A lot of Democrats are coming out of the woodwork, really,” Mattie said. “And it’s really neat to see that kind of build.”

Twenty-year-old Rachel Scriver  of Oseola is excited to cast her ballot, but she said many in her generation don’t realize what impact they could have if they voted, too.

“Most of them don’t vote,” she said. “I think it’s kind of sad because most of them are complaining on Facebook about what is going on, especially the fetal heartbeat bill.” 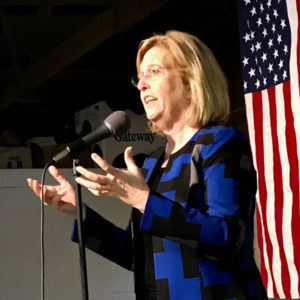 Andy McGuire is denouncing that ban on nearly all abortions as she makes her closing argument to voters. She’s vowing — like all the Democrats in the race for governor do — to restore government funding to Planned Parenthood.

“Giving women their health care, getting them cancer screenings, making sure they can control their reproductive health with birth control — that’s how we have a better state,” McGuire said Saturday in Albia, “not these terrible, extreme laws that we have now.”

Ross Wilburn, the fifth candidate in the Democratic Party’s race for governor told the crowd in Albia it’s time for rank-and-file Democrats to act.

Republican Governor Kim Reynolds held a barbecue at her campaign headquarters Sunday evening. During an interview with Radio Iowa, she predicted Republican voter turn-out on Tuesday will be lower than Democrats because Democrats have a five-way race for governor.

“That’s just going to generate a lot of turn out,” Reynolds said. “I don’t think it’s going to be any indication of the General Election. We’ve got a great 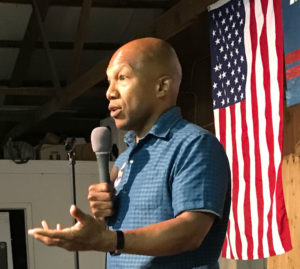 story to tell. We’ll get out there.”

Reynolds will get out of Des Moines for campaign events in Red Oak and Council Bluffs today and the Democrats running for governor are holding Primary-eve gatherings as well.

Reynolds plans to debate whomever Democrats nominate. It will be her first campaign debate, but Reynolds said she’s had plenty of debate “tune ups” during interviews with reporters around the state and weekly news conferences with statehouse reporters.

“They’re challenging,” Reynolds said. “I would not say there are softball questions.”

And Reynolds added she’s “pretty confident” her campaign team will get her ready for the debates to come.